There are many different steps involved in making a piece of pottery – throwing, tooling, decorating, glazing, and firing, which means there is a lot of variation in a potter’s job. Still, is there enough variation to sustain a passion for the craft for over thirty years? For Maureen and David, the answer is yes. David’s dedication to ceramics is kept alive thanks to his favourite aspect of the job: research. Specifically, David loves developing new colours and glazes.

Many potters use established colour and glaze formulas. You can buy a book of formulas, or, now, have a computer program develop a formula for you. However, although David won’t deny that the results of those established formulas can be successful, they don’t fit with his conception of ceramics. Making pottery means getting your hands dirty, using the materials around you, and, through trial and error and over the course of many years, making a pot that only you can reproduce, and even then, never in exactly the same way. 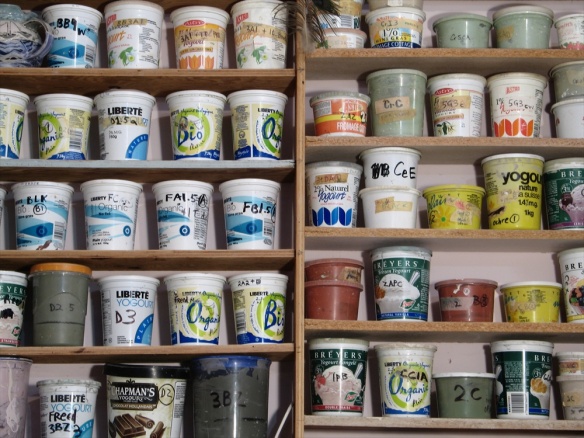 David’s process of developing new colours and glazes is a slow one—one might even call it Sisyphean in that it is a constant task (but not, like Sisyphus’, a pointless one). It requires curiosity, patience, and a knowledge of chemistry. First, David gets an idea for a colour or a glaze. Then, he develops a formula and mixes it up, using his collection of ground rocks or minerals. Next, he tests the new colour or glaze on a small surface.  Usually, it will take him quite a few firings, and so quite a few months, to refine the formula.

Next, he will apply the new colour or glaze to a larger item, like a beaker or a small bowl. Sometimes the colour won’t work on the larger surface. Then it’s back to tweaking the formula and waiting for results. Once David has gotten the colour or glaze to work on large pieces, he does a series of tests to ensure its reliability. David and Maureen only fire a kiln every 3-4 weeks, so David has to wait for his results. The shiny glaze David and Maureen are currently using on their porcelain took him almost five years to complete. You would think that, after all that, David would want to just sit back and enjoy his achievement for a while. Instead, he starts the process all over again. Sisyphus had to roll a giant boulder up a mountain again and again as punishment. But David is in no way punishing himself; rather, his painstaking steps are, to him, the job’s greatest joy. As Camus writes in The Myth of Sisyphus, “The struggle itself towards the heights is enough to fill a man’s heart.”

David’s method of preparing formulas is unusual among potters. He uses volume measurements instead of the gram scale other potters prefer for accuracy. In other words, he uses tablespoons and teaspoons. It’s kitchen science, he happily informs me. He admits it may not be the most scientific of methods, but it makes for interesting results. 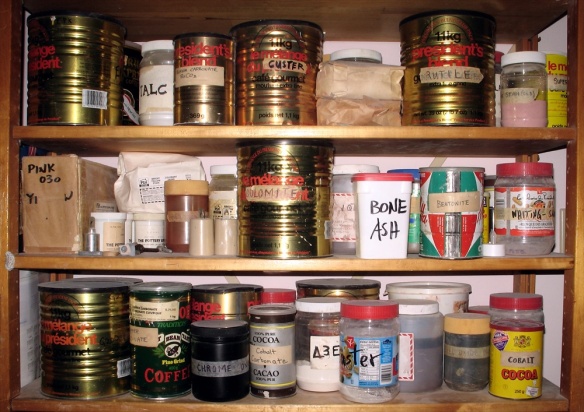 David keeps careful track of his progress. He has filled stacks of books with his notes. 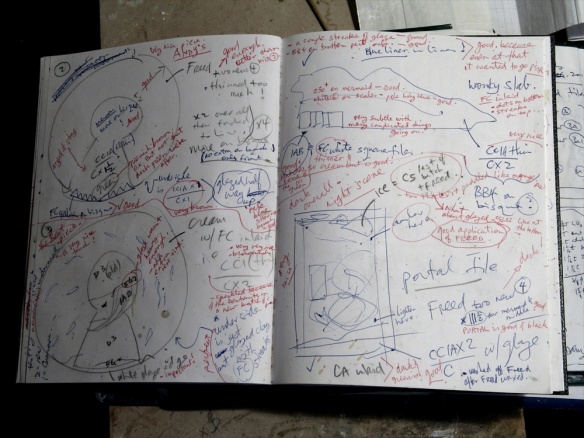 Some of his documentation is even functional. He performs tests on little cups, for example, that we use to serve wine at gallery events.  He will never sell these cups, though people often try to buy them. “Would you try to buy my sketchbook?” he jokes. 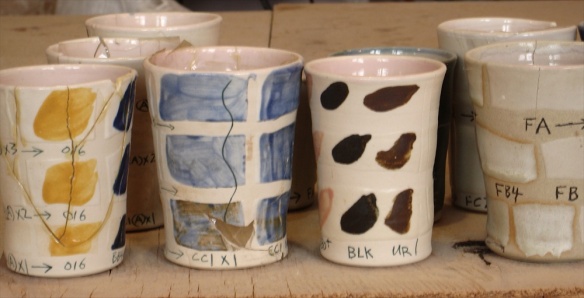 Inherent in David’s excitement about developing new formulas is his desire to constantly improve his craft. After many years, throwing pottery on the wheel can feel quite easy, he explains. But when developing new colours and glazes, there are always challenges to face, new triumphs and disappointments greeting you with each kiln. Also, David explains, he likes the impossibility of controlling the outcome. You do your best, but then you must be prepared to be surprised, pleasantly or not. You can’t expect every pot to turn out the same, so why not look forward to the surprises? Why not celebrate the irregularities? 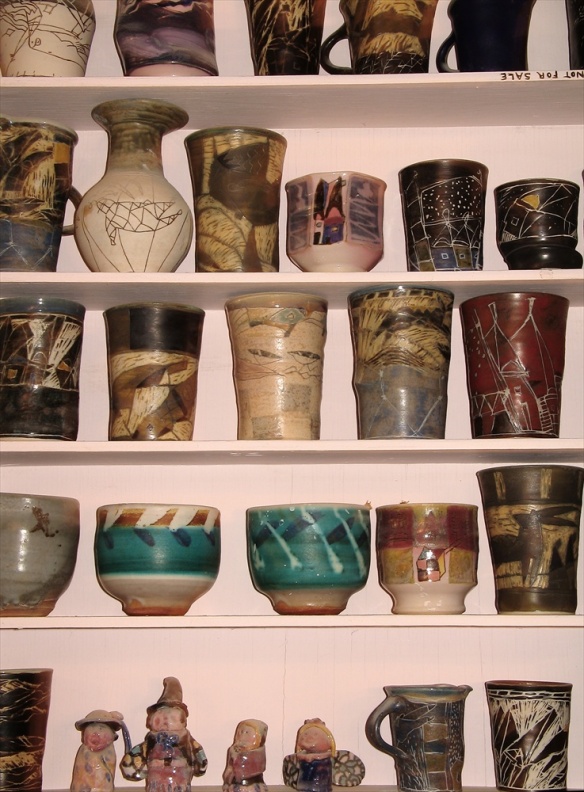 Finally, to keep experimenting, to keep pushing yourself and your materials, means that your work will keep evolving. As a result, David’s work is alive, his passion for his craft is as strong as ever, and one of our most ancient art forms is still dynamic, being pushed, test by test, kiln by kiln, in new and exciting directions.