Last week, I discussed David’s vocabulary of images, which he uses as symbols in his work. This post addresses some specific images, using Cirlot’s A Dictionary of Symbols, and David’s own thoughts. 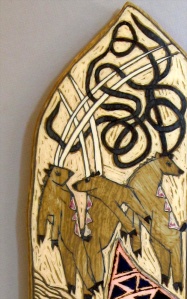 Antelopes and Jesters are David’s male archetypes. These figures do not refer to any man in particular, but to men in general. The antelopes usually have ridiculous sets of horns, and the jesters, well, they are by definition not very serious either. David admits that in using these figures to stand in for men, he is trying to take some hot air out of traditional masculinity. He could have used a figure like Hercules, for example, to show man’s strength, or Adonis, to show male beauty, but I think it’s to his credit that he refuses to stroke the male ego, and instead fills his pottery with grinning jesters and offbeat antelopes with wild horns. 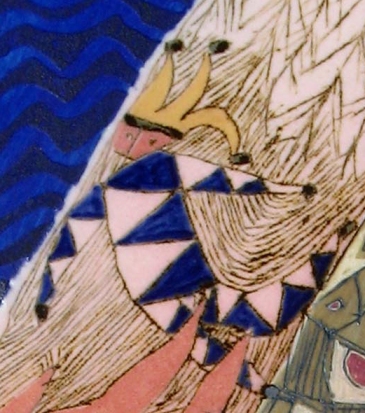 Mermaids and Queens are David’s female archetypes. The women in David’s work, both those above water and those below it, are often crowned. A crown is a sign of pre-eminence, of success. The women always have long hair that David describes as powerful. That hair is often a force of nature—it turns into a river, or, like Sedna’s hair, it gathers strength and eventually brings about a storm. Hair is, according to Cirlot, a sign of energy, of spiritual force, and a will to succeed. A full head of hair, he explains, symbolizes a joie de vivre (129).

And the two archetypes together? Well, that’s often a love scene. 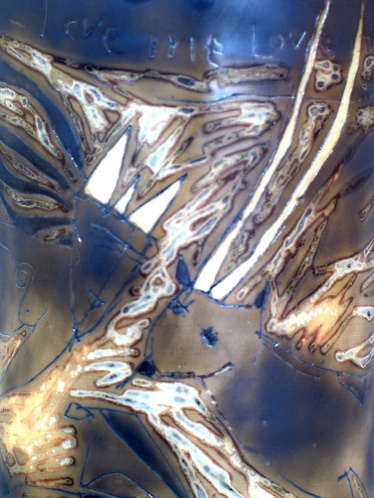 Houses are particularly loaded images for David. He’s read enough Carl Jung to see the house as a symbol for the layers of the psyche. The basement, for instance, symbolizes the unconscious mind, or the instincts, while the attic refers to the more conscious, rational part of our minds, the part that prevents us from following our every urge. According to David, a house also symbolizes settling down, an anchoring of yourself to the earth, both physically and mentally. David’s houses are always a bit off-kilter and full of life. They are the same size as his figures, and they have crooked little stilt legs that make them look like they are dancing. 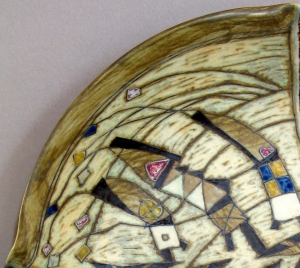 Rivers symbolize endless movement, or, in the way that they start as tiny streams and grow until they are subsumed into larger rivers or seas, suggest a lifetime. Water is also a traditionally feminine element, linked as it is to tides, the moon, and cycles. David often depicts women submerged in water, or becoming water, or, in the case of Sedna, controlling water. 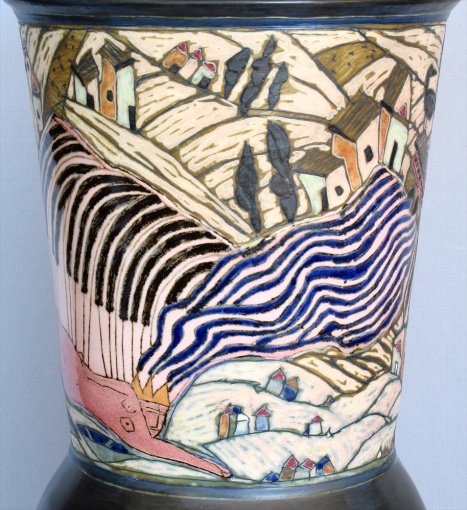 Fields are another traditional female symbol, representing earth, growth and food. Cirlot points out that they call to mind “spaciousness or limitless potentialities” (98).

Arrows show movement, direction, and purpose. David uses them to animate a surface and control the action in the piece. Of all his images, the arrow is the most abstract image because he is drawing an idea rather than an object. 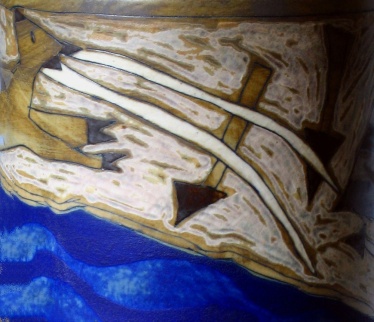 Boats symbolize a journey, whether that be a physical journey, or a journey of awareness. 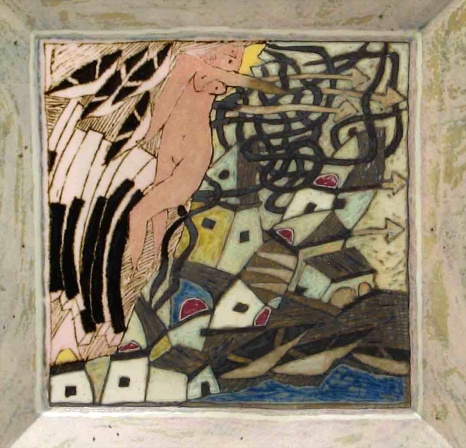 Bridges are transitions from one state to another; they symbolize change. They connect two separate worlds. According to Cirlot, “there are a great many cultures where the bridge symbolizes the link between what can be perceived and what is beyond perception” (32). 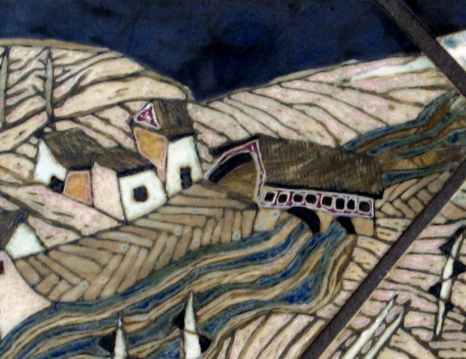 And in this sense, David’s images act as bridges–between the objects we can see (a field, a boat) and the more abstract ideas they represent (limitless potentialities, a journey). Finally, I see David’s work as a bridge to another time; a time when people saw the world in symbols; when everything had deeper meaning. During the Middle Ages, for example, everyone was aware of the importance of symbols: “The Middle Ages never forgot that all things would be absurd if their meaning were exhausted in their function and their place in the phenomenal world, if by their essence they did not reach into a world beyond this” (Huizinga, as quoted in Peter S. Beagle’s The Garden of Earthly Delights, 37).  David’s work, I believe, reaches into a world beyond this one. On his pottery, there are always two layers: the immediately visible one, and the one underneath that, which only shows itself through interpretation. 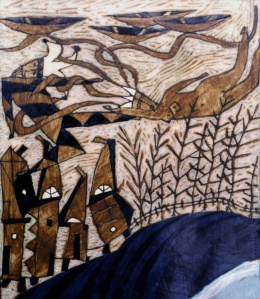 Here is a story I see in the above tile: A man and a woman are joined together by hair, which symbolizes power and joy. The boats floating on that hair tell us that the figures are embarking on a journey, while the houses might indicate that they will also be settling down, maybe in a community. Perhaps, then, these two figures are getting married (or becoming common-law), and the river flowing by them is a sign of a new life beginning. (Conversely, a less optimistic viewer might see the woman’s hair entangling the man, trapping him, and drawing him down towards houses with shaky foundations…) 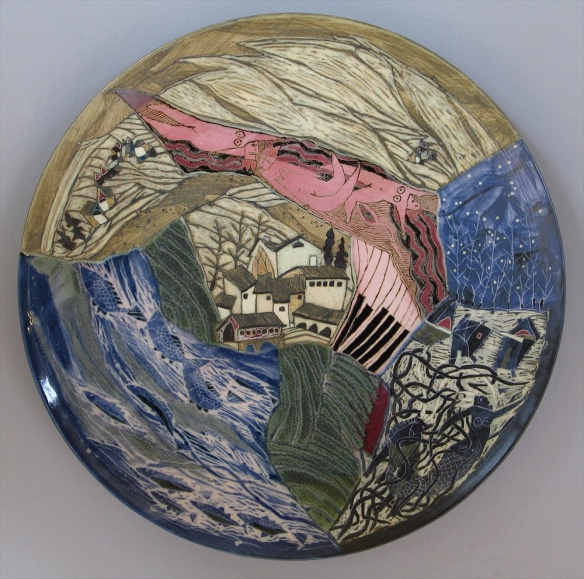 Regardless of the interpretation, the fact remains that there is a story in each of David’s pieces, and his images, saturated with meaning, are an entrance into that story. With consideration and imagination, they open up to reveal other worlds. 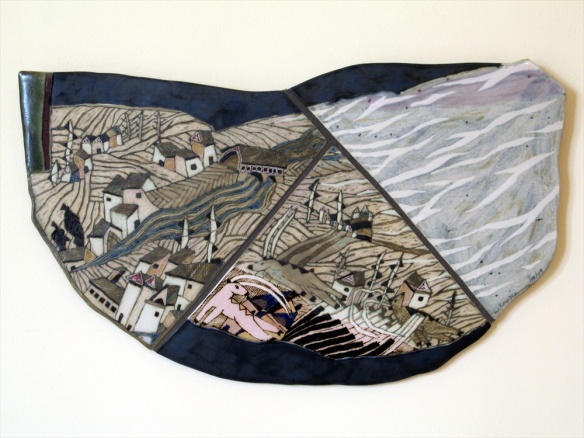 Thank you all for reading this blog. I will be away for the next three weeks at the Banff Centre, working on my novel. I will post again on October 23rd. If you would like to be reminded of that date, you can receive an email notification when I post by clicking on the “follow” button on the right-hand side of this page. Again, I appreciate you taking the time to read this blog, and look forward to starting up again when I return from Banff.

2 thoughts on “A Vocabulary of Images- Part Two”